Imperfect - Yes; Bliss - Not Even Close! 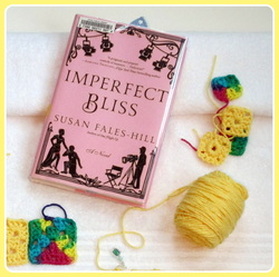 The pretty pink cover, the Victorian inspired art-work and the proclamation of the novel inside being Jane Austin meets Reality TV are the reasons I selected this book.  I can’t for the life of me figure out what forces kept me reading past the first few chapters.

Here’s the storyline: Elizabeth (aka: Bliss) is a recently divorced single mother who is “temporarily” living at home while perusing her PhD.  She is one of 4 sisters.  Her mother is obsessed with British royalty so much that the girls have all been given the first name “Princess” or “Queen” and she wants nothing more than to marry her daughters off to rich men who will improve their station (yes this is a contemporary novel).

Mother’s prayers are answered and Bliss’ nightmares come true when her sister Dianna is selected to be the star of the latest reality offering – The Virgin. Lives are turned upside down as the TV series takes over.

It could be funny.  It could be a witty poke at the horror that is reality TV.  It could be many things. To me, it was a mess.  Bliss had potential, in fact all the characters had potential, but none of them were fully flushed out.  And what I did get to know of them I didn’t care for.  I don’t expect that I will love every character.  But I do expect that at least the main players will be given enough life so that I understand the reasons for their behavior. There was a peek at the ‘back stories’ but that’s all.  Had they been given more attention I might have embraced this dysfunctional family and their bizarre behavior. Instead I was annoyed with most of them and felt sorry for the rest.

So why then did I keep reading until the end? Hope, maybe? I kept thinking that it would get better. That it should get better. For me, that never happened.  And in the interest of finding out how it ends, I did that sort of ‘skimming’ that I do when I’m not committed enough to read every word.

Too bad.  It’s a good idea for a book.  And even though I gave it ample opportunity to win me over, in the end I was left feeling a misled and disappointed. I say leave this one be and if you want something that’s “like” Jane Austin stick with the original!