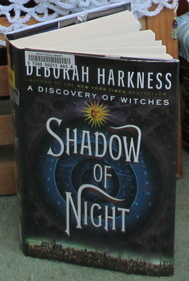 In A Discovery of Witches we are introduced to Diana, a reluctant (untrained) witch and Oxford scholar and Matthew a geneticist vampire.  Together they are searching for a sacred manuscript called Ashmole 782 that is said to hold the secrets of the creation for all creatures - and just may be the only way to save them from extinction.

In Shadow of Night they have traveled back in time to 1590 and Elizabethan England.  Here they believe they can search for the manuscript in relative safety and find a teacher who can help Diana master her powers.

These books are so different from what I normally read, but I am completely enchanted with them! A friend convinced me to read the first one and I was captivated.  There is a blend of history and fact that makes the entire story seem plausible.  I also really like Diana.  She is a smart, strong woman who manages to face the unanswered questions surrounding her past with just the right blend of grace and trepidation. Matthew is complex and mysterious - as any vampire who has lived several hundred years would be, yet he manages to be compassionate and understanding especially where Diana is concerned.

In this book the author has done a great job (again) of blending real characters (William Shakespeare and Walter Raleigh plus Queen Elizabeth!) into the every day lives of the couple.  It was interesting,  the way that life was depicted. And I enjoyed watch Diana grow into a confident witch and "modern" woman.  The story and the search for Ashomle 782 did detour a bit, and occasionally I found myself wondering how a certain event fit into the big picture. Happily though in the final third of the book there's lots of action and I found most of my questions answered.  Of course, not all of them - or there would be no need for book 3!

It's funny, but the older that I get the more varied my tastes have become, and I'm quite pleased to have discovered this series! I don't think that I'll actively be seeking witches and vampires on a regular basis, but I certainly won't be so quick to dismiss them.  So far this has proved to be an entertaining and engaging series.  There's history and action, a love story, family secrets, time travel, mysterious powers and the quest to save the world. Really what else could you ask for??