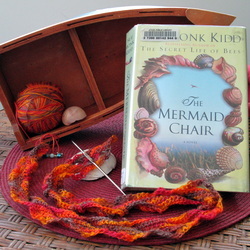 I don’t usually do this, but today I’m going to rely on the inside book cover to tell you what this book is about…

"…Now in her luminous new novel, Kidd has woven a transcendent tale… Inside the church of a Benedictine monastery on Egret Island, just off the coast of South Carolina, resides a beautiful and mysterious chair ornately carved with mermaids and dedicated to a saint who, legend claims, was a mermaid before her conversion.

When Jessie is summoned home to the island to cope with her eccentric mother’s seemingly inexplicable act of violence, she is living a conventional life with her husband Hugh. Jessie loves Hugh, but once there, she finds herself drawn to Brother Thomas a monk who is soon to take his final vows.

So here’s the thing. There are parts of this book that are beautifully written. There are luminous moments as the cover promises, but the relationship between the main characters just doesn’t make sense to me. Jessie and Brother Thomas, two mature adults see each other one dark night in the woods and it’s love at first sight – what? They spend a few months sneaking off for hanky panky in the sand and without hesitation declare their undying love for each other. But when Jessie’s mom goes off the deep end it becomes clear that Brother Thomas isn’t going to be the one to help her deal with the problems.

There are some great characters on the island, and a dog that is a celebrity in his own right. It’s clear that Jessie is struggling in her relationships with Hugh, her mother, and her daughter as well as with the death of her father when she was a child. She is sad and confused and has a lot of “issues” to work out.

As I’m writing this I’m thinking, okay I guess I get it. But that’s not what I thought while I was reading. Then I thought, they’re not in love, they’re in lust – you don’t really expect me to believe they’re going to live happily ever after do you? Maybe Kidd wanted me to react that way. Maybe she was trying to show how confused, distraught people behave in erratic, unreasonable ways?

I suppose this is one of the reasons that I love books. They make me think.  And there’s something to be said for a book that elicits this kind of a response from me! Do I recommend this one, honestly I’m not sure! I’d say if a book about relationships, family, trauma and figuring out who you are and where you’re going is you’re thing than give it a try. And please, let me know what you think.  If none of that stuff interests you than it’d be best to steer clear.