A Surprising Story Brimming with Emotion and Flooded with Humanity 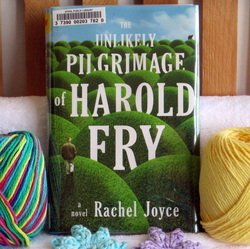 Harold is a simple man. He and his wife Maureen live a simple  life in a small English village. He has recently retired from the brewery where he worked, well always.  Maureen thinks that Harold is dull. Everything that he does irritates her just slightly. Predictably, the mail arrives just as it does everyday.  But this time there is something different among the bills and adverts. A letter has come for Harold from a woman he hasn't seen or heard from in twenty years.  Queenie Hennessey is gravely ill and has written to say goodbye.

Harold is surprised by the letter.  He hasn't even thought of Queenie in years. Regardless, proper English etiquette requires that he at least acknowledge her letter with one of his own.  Quickly Harold jots a few lines, and heads out to post the letter.  When he reaches the mailbox on the corner he finds that he's not quite ready to let the letter go.  He continues on from box to box venturing out of his neighborhood.  Then, following a chance encounter with a young girl in a convenience store Harold decides that he must deliver his message in person.  And, that he must walk nearly six hundred miles in order to do so.  Because, he believes as long as he keeps walking, Queenie Hennessy will keep on living.

And so begins the Unlikely Pilgrimage of Harold Fry. Though he has forgotten to bring his mobile, is wearing yachting shoes (though he doesn't yacht) and has only a light sweater to keep him warm he embarks on a quest that will bring him to places he never imagined existed both physically and emotionally.  With each step he travels closer to Queenie, and to discovering the man that is buried beneath years of monotony.

Harold and Maureen seem to be an average, normal couple who have settled into life.  But the truth is they have been together for so long that they have forgotten why they fell in love in the first place.  And then there's their son David.  He's something of an enigma but a source of friction non-the-less. As Harold walks he thinks. As Maureen waits she thinks. And there is so much for them to think about!

Along the way Harold happens upon a cast of characters that are as diverse as your imagination allows and so rich with personality that their stories seamlessly become Harold's. Everyone has something to offer. Some times it's food or shelter and others it's a bit of advice.  It is because of them that he is able to keep walking.  But what's even more interesting is what Harold gives them in return, and how these brief chance meetings have such an impact on each of them.

As I was reading and getting to know the characters I grew fond of them.  With every encounter that unfolded on the road I found myself holding my breath as I waited to see what happens next.  There are so many layers to this book. So many stories that the author has brilliantly blended together.  I didn't know if Harold would make it or if Queenie would live.  I wondered what Maureen was going to do when she realized that she really missed her husband. And what about David?  How did he fit into the story? Page by page, step by step they all are finding their way, and what started out as unlikely makes perfect sense by the end of the story.

Interesting, funny, charming, sad, curious, awkward, corny, scary, personal, heart warming, unexpected, delightful, offbeat, wonderful. These are just some of the words that I can use to describe this book.  It's quite different from anything I've read lately.  It's a human story that I was able to immerse myself in.  I don't know if you'll enjoy it as much as I did, but there's a good chance you will. Check out a copy at your library and see for yourself. You might end up taking your own unexpected journey!
More Reviews