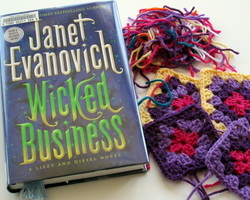 Wicked Business is book two in the new Lizzy & Diesel “Wicked” series from Janet Evanovich.  Lizzy is a pastry chef.  Actually, she makes cupcakes at Dazzles Bakery in Salem, MA.  Finally she is putting her life in order. And with the exception of Diesel and his monkey Carl things couldn’t be better. Diesel is her on again/off again partner.  He’s extremely good looking and smells like Christmas cookies.  Their partnership is a bit of a mystery. Diesel is a bit of a mystery.  He has special powers. He can find people and things and there isn’t a lock he can’t open. He’s also (almost) immortal.  I think you can kill him, but it’s quite hard to do. Lizzy as it turns out has “abilities beyond the ordinary” too.  Hers seem to be along the line of being able to tell if people or things are enchanted.  That may not be the right word, it’s more like she can tell if they have special energy. Diesel works for an organization that has assigned him to find and protect the stones of SALIGIA.  They are old and mystical and are thought to represent the seven deadly sins. If you combine them all together they will unleash mayhem – the equivalent of hell on earth.  Diesels’ cousin Wulf (short for Gerwulf Grimore) and his medieval minion Hatchet are their main rivals.

Rumor has it that the stones of SALIGIA have surfaced in Salem.  In particular the Luxuria Stone which is said to be infused with the power of lust.  The murder of Harvard professor Gilbert Reedy sends Lizzy and Diesel on a quest to find the stone.  Hopefully before it falls into the hands of Wulf or the devotee of lawlessness and chaos know as Anarchy.

Now that you have a little background on the series and this book, let me tell what I think.  I have been a fan of Janet Evanovich and the Stephanie Plum books since that series started.  Truthfully though, after 18 adventures I’ve grown tired of Stephanie. Lizzy reminds me of all the reasons that I became a fan of Janet’s so many years ago.  I love this story line. A bit of magic and mystery, dark menacing villains and a riotous cast of characters create a diverse ensemble.  Lizzy is a funny, quirky woman.  She’s smart and sassy, but not cocky. She’s not exactly sure what’s happening around her, but she’s a trooper and she’s willing to do what she can to stop the total destruction of the planet.

The book moves quickly right from the start and there’s lots of action to keep you interested. It had been a while since I read Wicked Appetite (book one) and I forgot how much I enjoyed it.  Book two did not disappoint. There’s great chemistry between the characters, and while I feel an occasional shadow of Pluminess it’s not enough to turn me off. I also like that this series has a finite number (7). I’d hate to see a good thing go bad just because the formula works. Even too much of a good thing can be bad for you – like cup cakes…

If you’re a fan of Janet’s then you’re probably already on the list for this one.  If you’ve never read her and are looking for a quick, light entertaining read than by all means go for it.  You could read this as a stand alone, but I suggest starting with number one.  Chances are once you start, you’ll be hooked!