​
Next Meeting - Monday, October 24, 2016
Noon - 1:00 PM
Welcome Friends! Have you heard about our book club? Once a month we all read the same book and then get together over lunch and share our thoughts. These are fun, interesting and stimulating conversations. Each month I am enlightened by the insight my fellow readers bring to the discussion. It is wonderful to hear how differently we all interpret the same text. Plus it's just the nicest bunch of people you can imagine!!

Please stop by the Athol Public Library to pick up your copy of the latest title. No registration is required and the group is open to everyone. Not from the area? Check with your local library for access to our current selection or any of the books on our list.
What We Are Reading Next
What we read in March, 2016
What we read / watched in February 2016
What we read in November 2016
What we read in October 2015
What we read in September 2015
The Group Review: Delicious! was our first read after the summer break.  It was terrific to have everyone back together again and I was pleased to see new faces as well.  Before I tell you what we thought of the book, let's talk about the Gingerbread. Billie's Gingerbread plays a predominant role in this coming of age tale for foodies.  Because the recipe is included in the book, and because desert is an important part of our book group I had to make it. Other than omitting the whiskey soak (we're an alcohol free household!) I followed the recipe to the letter - grinding all the spices by hand thanks to Carol Ann and her mortar and pestle. It was time consuming and hard work! However, in the end we were rewarded with an aromatic, tender cake that explodes with a full richness of flavor! I don't know that I will be making it again, but for my book group friends it was totally worth the effort!

Now about the book.  We are a big group. About 15 people attended the September meeting, and overall the book was well received. Many folks commented on the depth and variety of different subjects that are blended together to create the full tale. The main character, Billie is at the center and with her there is the magazine, the mansion, her sister and father, the complainer, Sal and the cheese shop, the secret library, James Beard and Lulu and even more. Personally I think everything was combined with just the right balance, but a few in the group disagree and I understand. Although the story has predictable events, many of us easily overlooked them and enjoyed the manner in which they are served.
​
What we read in June 2015
It appears that What we read in March, April and May has disappeared!
I guess that means I need to re-enter them!
What we read in February 2015
What we read in January 2015
The Group Review: Wild was met with diversely different opinions. As varied as the adventures Cheryl had on the trail. We only read non-fiction a few times a year, just to mix things up and expand our horizons a bit. I think that majority of the group was disappointed. After all, the book was on the best seller list for over a year, and it was made into a major motion picture starring Reese Witherspoon (who some say will be nominated for an Oscar) - what did others get that we didn't? For one thing, I think that we were expecting a book about hiking the PCT. Instead, we got the memoir of a young woman struggling to deal with the death of her mother (among other things), and find her place in the world. Using the trail as a vehicle for delivering her story was indeed a clever idea. Unfortunately, many of us were not able to get into her activities on (or off) the trail.
What we read in December 2014
The Group Review: The Snow Child is one of the rare books that was met with mixed reviews. We often tend to lean with a majority one way or the other, but not this time. Our group was all over the place: there were the few who loved it; those who thought it was okay;  one who didn't finish; and others who had to push themselves to the end. One of most commonly expressed observations was the element of fantasy. Was she a real girl or a fairy tale? The author left much up to the reader to imagine and decide. The descriptions of the Alaska wilderness and the are so vivid that you may find yourself reaching for a blanket or putting another log on the fire.
What we read in November 2014
What we read in October 2014
The Group Review: We waited a long time to read this book!  It seem like every book club in MA has read it at some point!  So was it worth the wait? Yes - with reservations!  It's safe to say that other than one person we all finished and were generally satisfied.  Everyone (minus one) was able to identify parts of the book that they enjoyed.  Most found the details of the art and forgery interesting, and learned much about the business of forging paintings!  Claire was met with mixed feelings, although it's safe to say we all agreed she was a very good artist who for various reasons didn't receive the positive recognition she deserved.  Isabella's letters were a highlight for many, but the story struggled to flow from the past to the present.  We appreciated the author sharing the parts of the story that were factual and those that she created.  Overall I'd say The Art Forger averaged 2.5 stars out of 5!
What we read in September 2014
The Group Review: It was easy choosing this book to kick off the fall reading season. I read it when it came out in 2012 and wanted to share it with the group as soon as I finished.  As with many new, popular titles it took some time for enough copies to be available to accommodate our large group. There were 19 of us at this months meeting. It was nice to welcome some new folks as well as many of the regulars.

I had a feeling that Harold would be well received, and I wasn't disappointed! I also thought that Harold would give us plenty to talk about. A book that everyone likes can be challenging. How many different ways can you say, "I liked it, it was good."? What happened with Harold is that we seemed to like him for different reasons. One thing we all agreed on- his shoes!!
2014-2015 Reading List 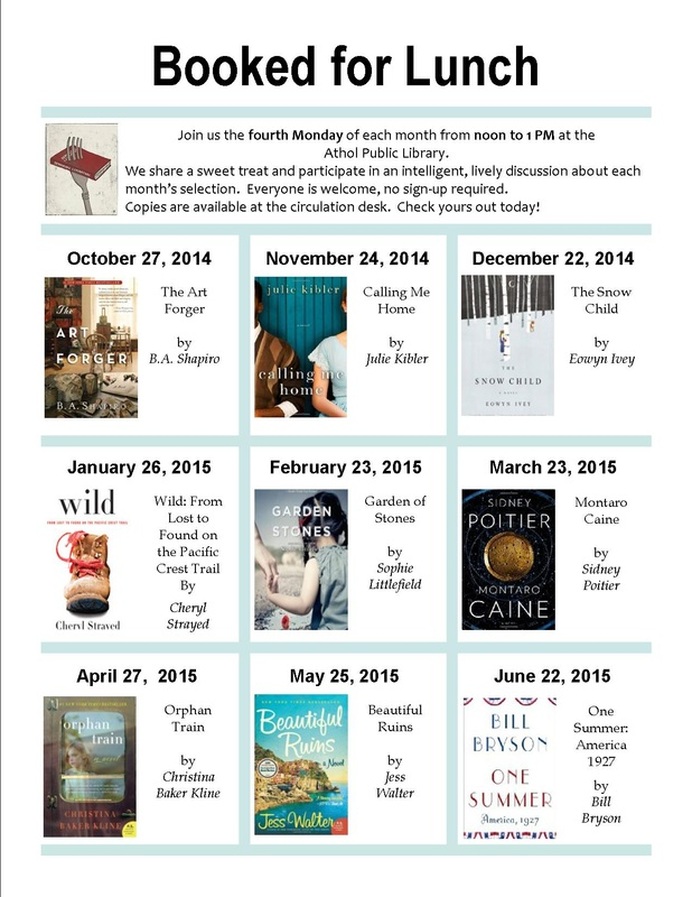 Here's What We Read Last Year 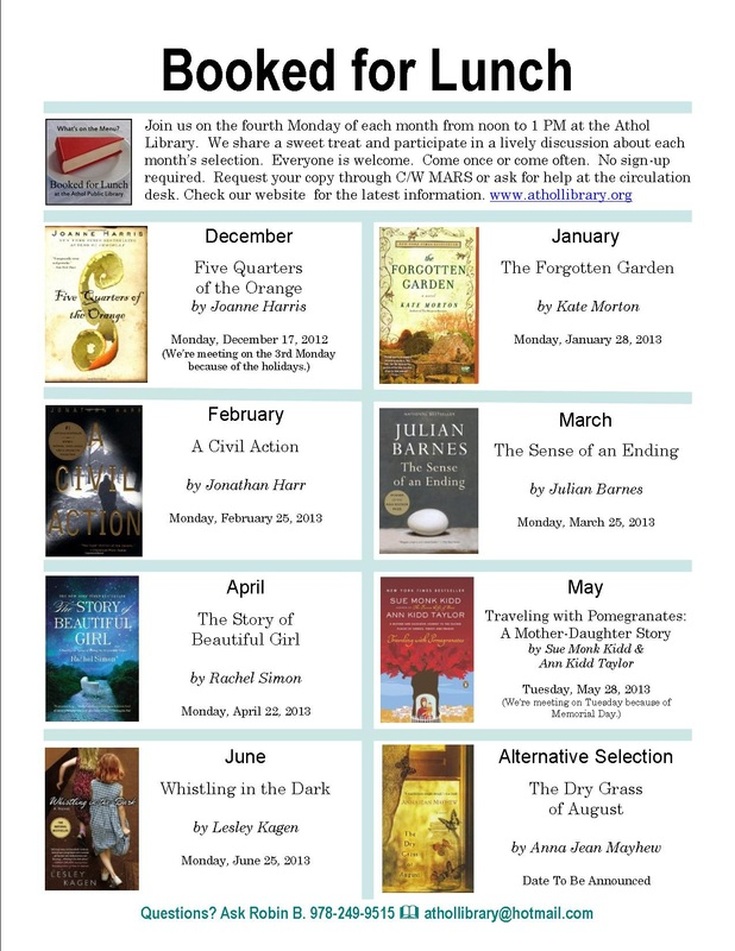 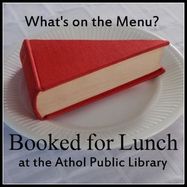 Once a month we get together for a lively discussion on the selected title.  We read popular fiction as well as non-fiction.  Our choices are typically newer, but a classic slips in once in a while! It's an informal setting and everyone is welcome to attend.  You can come once or come every month, it's up to you.

If you have any questions please give me a call at 978-249-9515, or email me at athollibrary@hotmail.com

Last Year's Selection Survey
I'm leaving the survey just in case you want to read one of the titles we didn't choose.
(they all look good to me!!)